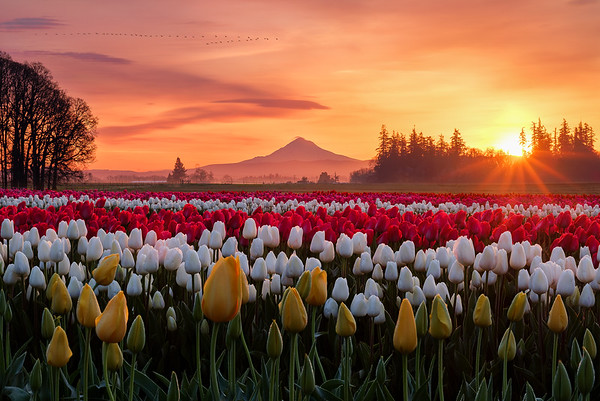 The Wooden Shoe Tulip Festival is held every April just south of Portland, Oregon. After living in Oregon for 6 years, and missing it every single time, I finally made it in April 2017! I woke up quite early to get down before the sunrise (which was only getting earlier and earlier) to find a field sparsely filled with tulips and the ones that were there were leaning severely to the South. What I had failed to account for, was the fact that it was quite early in the season and that there had been gale-force winds just a day before! I watched the sunrise with some photographer friends and headed out swearing to return. A mere two days later the sunrise looked promising so I packed up early and headed down. To my surprise there was a whole row of flowers that weren't there on Sunday and the resilient tulip stems were back into shape! The entire morning was crisp, quiet, and calm. Everything about this image captures how serene that morning was.